The recursive structure of the QFT with number of qubits seems to contribute to that efficiency.
— AHusain

We need to find the column vector . The general method is already shown on the Wikipedia page. But we will develop a matrix notation for the same. can be easily obtained by pre multiplying by the matrix:

where is . Each element of the matrix is basically . is simply a normalization constant.

Finally, turns out to be: .

Now, sit back for a while and notice a few important properties:

It can be very simply noticed that the classical DFT has a time complexity . That is because for obtaining every row of , operations need to be performed. And there are rows in . 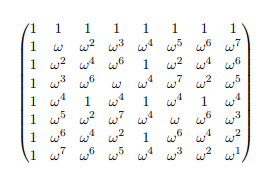 In the first frame, we have represented the whole Fourier transform matrix by describing the th row and th column: . In the next frame, we separate the odd and even columns, and similarly separate the vector that is to be transformed. You should convince yourself that the first equality really is an equality. In the third frame, we add a little symmetry by noticing that (since ).

Notice that both the odd side and even side contain the term . But if is the primitive Nth root of unity, then is the primitive nd root of unity. Therefore, the matrices whose , th entry is are really just ! Now we can write in a new way: Now suppose we are calculating the Fourier transform of the function . We can write the above manipulations as an equation that computes the jth term . 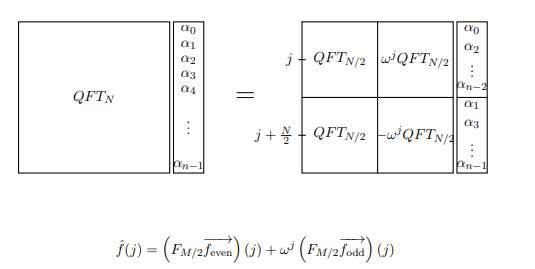 Note: QFT in the image just stands for DFT in this context. Also, M refers to what we are calling N.

In case of the Fast fourier transform the time complexity reduces to (try proving this yourself). This is a huge improvement over the classical DFT and pretty much the state-of-the-art algorithm used in modern day music systems like your iPod!

The strength of the FFT is that we are able to use the symmetry of the discrete Fourier transform to our advantage. The circuit application of QFT uses the same principle, but because of the power of superposition QFT is even faster.

The QFT is motivated by the FFT so we will follow the same steps, but because this is a quantum algorithm the implementation of the steps will be different. That is, we first take the Fourier transform of the odd and even parts, then multiply the odd terms by the phase .

Note: In the image M refers to what we are calling N.

Note: In the image, M refers to what we are calling N.

Lets construct . Following the algorithm, we will turn into and a few quantum gates. Then continuing on this way we turn into (which is just a Hadamard gate) and another few gates. Controlled phase gates will be represented by . Then run through another iteration to get rid of . You should now be able to visualize the circuit for on more qubits easily. Furthermore, you can see that the number of gates necessary to carry out it takes is exactly

P.S: This answer is in its preliminary version. As @DaftWillie mentions in the comments, it doesn't go much into "any insight that might give some guidance with regards to other possible algorithms". I encourage alternate answers to the original question. I personally need to do a bit of reading and resource-digging so that I can answer that aspect of the question.

One possible answer as to why we can realise the QFT efficiently is down to the structure of its coefficients. To be precise, we can represent it easily as a quadratic form expansion, which is a sum over paths which have phases given by a quadratic function:

where is a quadratic form defined on -bit strings. The quantum Fourier transform in particular involves a quadratic form whose angles are given by The structure of these angles has an important feature, which allows the QFT to be easily realised as a unitary circuit:

We may think of the indices of as input and output wires of a quantum circuit, where our task is to show what the circuit in the middle is which shows how the inputs connect to the outputs. The function above allows us to see the association of output wires to input wires, that in each case there is a Hadamard gate which connects the two ends together, and that apart from the Hadamards (and SWAP gates which accounts for the reversal of in the order of the indices between and ), all of the other operations are two-qubit controlled-phase gates for relative phases of . The second condition on serves to ensure that these controlled-phase gates can be given a well-defined time ordering.

There are more general conditions which one could describe for when a quadratic form expansion gives rise to a realisable circuit, along similar lines. The above describes one of the simplest cases, in which there are no indices in the sum except for those for the standard basis of the input and output states (in which case the coefficients of the associated unitary all have the same magnitude).

— Niel de Beaudrap
source
I am not sure I fully understand. Are you saying that any evolution represented as a quadratic form expansion with a quadratic form satisfying those two conditions can be efficiently implemented? Very interesting
— glS
@gIS: yes, and furthermore the structure is essentially the same as the Coppersmith QFT circuit (or rather, the fact that the QFT has that form is why the Coppersmith circuit structure suffices to realise the QFT).
— Niel de Beaudrap
8

Efficient solutions (that scale as a polynomial of ) exist if the group is Abelian, i.e. if the operation is commutative, making use of the Fourier Transform over the relevant group. There are well-established links between the group structure (e.g. ) and the problem that can be solved efficiently (e.g. Simon's problem). For example, if we could solve the Hidden Subgroup Problem for the symmetric group, it would help with the solution of the graph isomorphism problem. In this particular case, how to perform the Fourier Transform is known, although this in itself is not sufficient for creating an algorithm, in part because there is some additional post-processing that is required. For example, in the case of Simon's Problem, we required multiple runs to find enough linearly independent vectors to determine . In the case of factoring, we were required to run a continued fractions algorithm on the output. So, there's still some classical post-processing that has to be done efficiently, even once the appropriate Fourier transform can be implemented.

In principle, the Hidden Subgroup Problem for Abelian groups is solved as follows. We start with two registers, , and prepare the first in a uniform superposition of all group elements,

and perform the function evaluation where is defined such that by taking each element and combining with the members of yields the whole group (i.e. each member of creates a different coset, yielding distinct values of ), and is known as the orthogonal subgroup. Tracing over the second register, Now we perform the Fourier Transform over the group , giving the output state Each of the vectors has a probability of of being found, and all others have 0 probability. Once the generators of have been determined, we can figure out the generators of via some linear algebra.
— DaftWullie
source
3

One of many possible constructions that gives some insight into this question, at least to me, is as follows. Using the CSD (cosine-sine decomposition), you can expand any unitary operator into a product of efficient gates V that fit nicely into a binary tree pattern. In the case of the QFT, that binary tree collapses to a single branch of the tree, all the V not in the branch are 1.

We use cookies and other tracking technologies to improve your browsing experience on our website, to show you personalized content and targeted ads, to analyze our website traffic, and to understand where our visitors are coming from.

By continuing, you consent to our use of cookies and other tracking technologies and affirm you're at least 16 years old or have consent from a parent or guardian.